How to Detect Ransomware with FileAudit

Home / IT Security / How to Detect Ransomware with FileAudit

According to the FBI, ransomware – the strain of malware whereby files and folders are locked down by criminals and not released until a ransom is paid – is a growing concern. This, coupled with the new mass access alerts with FileAudit, has triggered many questions from both customers and prospects on how to detect these attacks with FileAudit.

Given the surge in interest, I wanted to answer some of those questions.

FileAudit plays a strong role in protecting a network against these kinds of attacks, so the following provides an overview of best practice in usage as well as a practical test encryption, including the results. So if you’re interested in using FileAudit to protect against ransomware, read on!

How does encrypting ransomware work?

An encrypting ransomware will typically come via an email attachment, which is opened by the victim – an unwitting company employee. Through a security exploit or flaw, malicious code is then launched which allows to download and install a program on the victim’s machine.

It is done this way because encrypting data directly with an asymmetric key is 1000 times slower than with a symmetric key, but in both cases the result is the same. Without the private key it is not possible to decrypt the files.

What this means is that if the victim doesn’t have a backup of all the encrypted files, the attacker will be able to force him to pay a ransom to get the private key.

So how can we protect against such a threat? There are a number of practical measures:

(More measures can be found here)

AppLocker is an excellent line of defence, because most malware will not be able to infect a computer if the user is only allowed to run programs, and not write, from the designated folders such as “c:\Program files” and “c:\Windows”.

The difficulty however, is that more and more cloud-based applications run from the user profile in order to be able to automatically update. So the administrator may need to handle many exceptions in the AppLocker rules, depending on what kind of applications users are allowed. The second difficulty is that AppLocker is only available in Enterprise and Ultimate editions of Windows.

How to configure FileAudit to detect massive encryption detection

So now that we have a good idea where FileAudit can play a role in our defence, how do we configure it?

If ransomware is encrypting files in a folder or share audited by FileAudit, this will trigger a lot of access events in FileAudit and we can use mass access alerts to detect it.

But what kinds of file accesses are generated by the encryption of a file? Firstly, the file content needs to be read in order to be loaded in the memory. Then, the data is encrypted in memory, the encrypted data is written into a new file and lastly the original file is deleted.

To test this, I developed a small tool to encrypt all files in a specific folder. 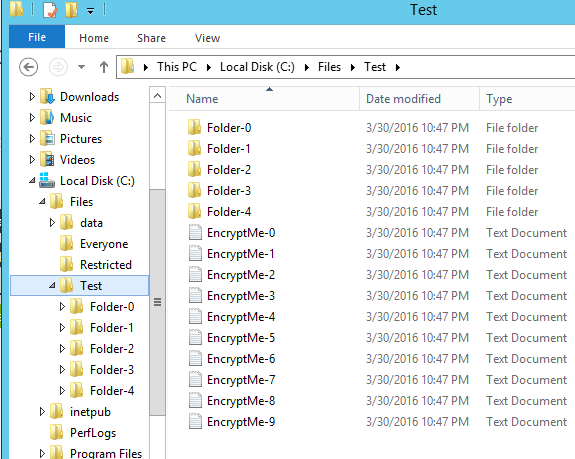 Then we can create the three mass alerts in FileAudit filtered by Access Type; respectively Read, Write and Delete. 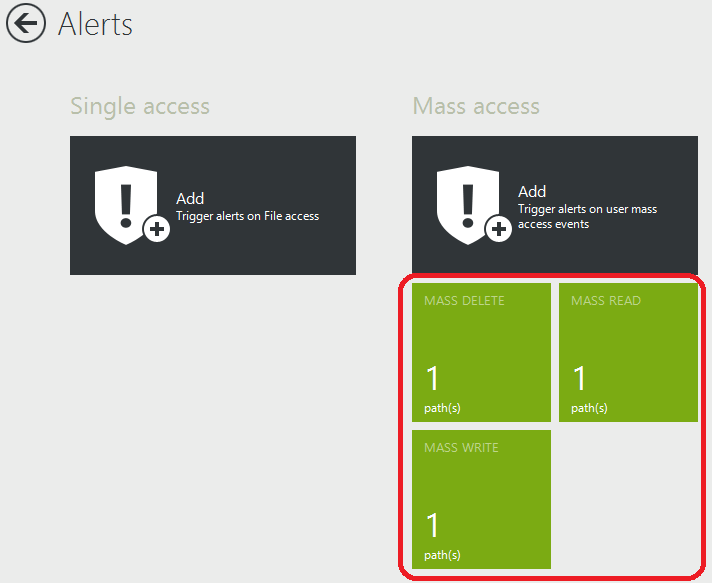 We keep the default thresholds for now. We will see later if we need to tweak them. 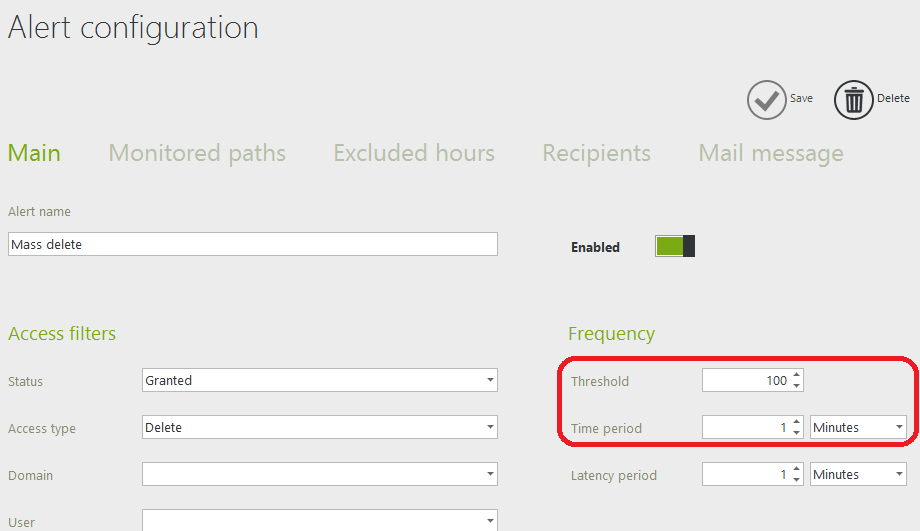 In the alerts added to FileAudit’s monitored paths we specify the star (*), to monitor all audited paths.

When done we save the alert and make sure SMTP settings have been correctly set up in the FileAudit settings.

Note: You can also configure a “single access alert” for file extensions that can be generated from ransomware, such as .cryptolocker. The screenshot below shows a list of common ransomware extensions.

Now everything is ready in FileAudit. We open a session on a workstation with the account Bob, start the encryption tool and specify the folder previously created with an UNC path. Then we hit the Encrypt button.

Immediately we check the root folder and we see that the extensions of the files have been changed, and that if we try to display the content of a file there is only random data. 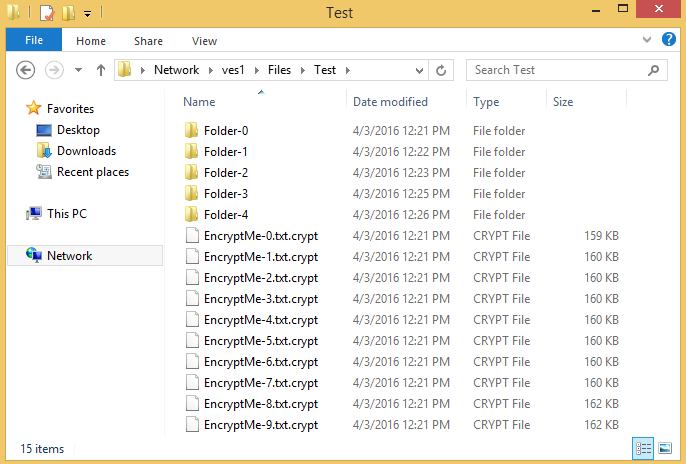 Then we check the mailbox of the administrator and we see the three alerts as expected. But we also get successive alerts every minute, because the encryption took more time than the latency period (more than one minute in this case).

In FileAudit’s File Access Viewer we see the confirmation of what we suspected. For every file, the file is read, a new file is written and the original file is deleted. 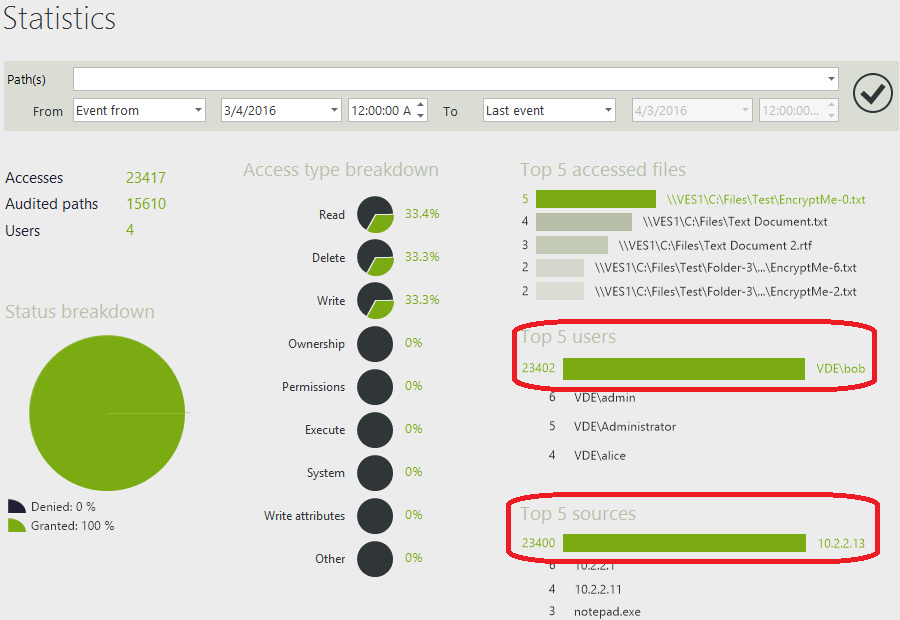 Now that we’ve seen how to detect the attack, let’s see how to stop it. With the release of FileAudit 6, you can now react to attacks to avoid significant damage, using a script that can be created and executed each time a specific alert is triggered.

In this case, you can therefore execute a script to log out the user automatically when the three read, write and delete alerts are triggered. That way, you stop the attack immediately, not just when the IT department intervenes.

We therefore go back to the configuration of our alerts. For each alert, in the execution tab, we configure the script to detect the three alerts like this: 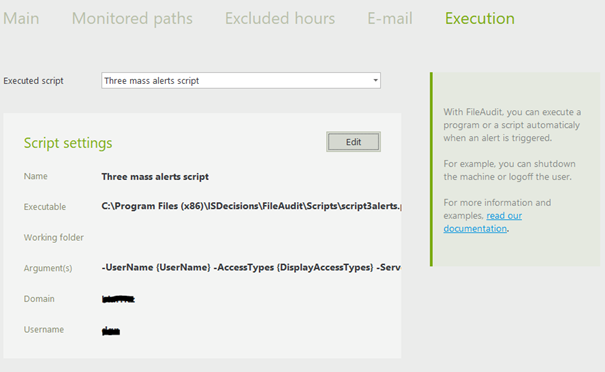 In details, the argument(s) field is:

All three alerts must have the same script configured.

Note 2: The user account that runs the script must be a domain administrator account because the script closes the user session that triggered the alerts (which is the account running the ransomware process).

Is the ransomware simulation realistic?

The test was successful, but was this simulation similar to a real life attack from an encrypting ransomware?

Some attack descriptions indicate that CryptoWall, which is common and dangerous ransomware, is able to encrypt 230 GB of data in two hours, equating to 30 MB/s.

For example with an average file size of 200 KB, if I encrypt a folder of 7,810 files for a total size of 1.6 GB with the simulation tool, it takes 40 seconds. This equates to an encryption speed of 40 MB/s or 200 files per second (or 12,000 files per minute). Which suggests our tool emulates a similar encryption speed to real world ransomware.

Additionally, ransomware programs are known to use AES 256 bit encryption to encrypt files, as does our simulation tool. So there is no reason why we should get a difference in speed.

The default threshold in FileAudit of 100 accesses per minute will trigger the alert. Of course the average file size may differ, affecting the speed of files per minute that can be changed, but ransomware is known to only encrypt the first MB of big files. As the threshold is 100 times smaller than what we can expect during an attack there is margin to deal with this.

There is also a small detail to mention about the simulation tool. Encrypted files are created with the same file name but the extension .crypt is added. This is specific to our simulation. Encrypting ransomware may have a different behavior. The new file extension may be different and sometimes the names of the encrypted files are also encrypted. This makes it very hard to locate a specific file within all the encrypted files. In any case, this has no effect in the detection by FileAudit.

So now you know how to detect – and stop – encrypting ransomware on your network with FileAudit!

However, as with so much in information security, you shouldn’t rely on a single line of defense. Depth of defense is integral to a strong protection strategy, and your ultimate line of defense should always be the backup. FileAudit can only detect an attack once the encryption has started. So even if you can stop the ransomware rapidly, you will always have some files to restore.

Jean-Noël is Director of Research at IS Decisions.