The world’s most searched-for cyber attacks and prevention measures

Searches for cyber threats have seen a steady increase worldwide, particularly in the last year, proving that it’s a major concern for people all around the world. In fact, according to IBM’s Cost of a Data Breach report, the average cost of a data breach has reached an all-time high, climbing 12.7%, from $3.86 million in 2020 to $4.35 million in 2022.

While many of the cybersecurity attacks we hear about happen at major enterprises, the reality is cyber criminals don’t discriminate by size: 61% of SMBs experienced a cyber attack during the last year.  A mistake many SMBs make is under-resourcing the IT security needed to prevent data breaches.

And the cyber security landscape is changing rapidly. For one, the global pandemic drove a huge increase in working from home. This need to accommodate remote work left IT leaders scrambling to find a way to support cloud technologies, the use of personal devices, and remote connections (whether VPN, outside the domain, or otherwise). Needless to say, this shift drastically changed the entire IT infrastructure of many organizations, moving environments from on-premise to hybrid almost overnight.

As the shift to hybrid exposed vulnerabilities, cybercriminals seized the opportunity, resulting in a 630% increase in cloud-based attacks between January and April 2020 alone.

Now that a hybrid infrastructure is standard for many organizations, a reliance on cloud technologies continues to drive an increase in significant cybersecurity challenges. To enable hybrid working, companies often rely on cloud technology and remote connectivity via RDP and VPN, which has led to a huge rise in cyber attacks on cloud services and VPN gateways.

This has led to a need for stronger IT security measures, along with a different approach to security itself.

To shed light on the solutions needed to secure networks, IS Decisions has analyzed Google search volume to identify what type of cyber threats people worry about the most online.

The most searched-for cyber threat by country

The first question that seemed to beg an answer was a simple one: what cyber threats seem to be causing the most anxiety world-wide? To find the answer, let’s take a look at the most searched for cyber threats by country. 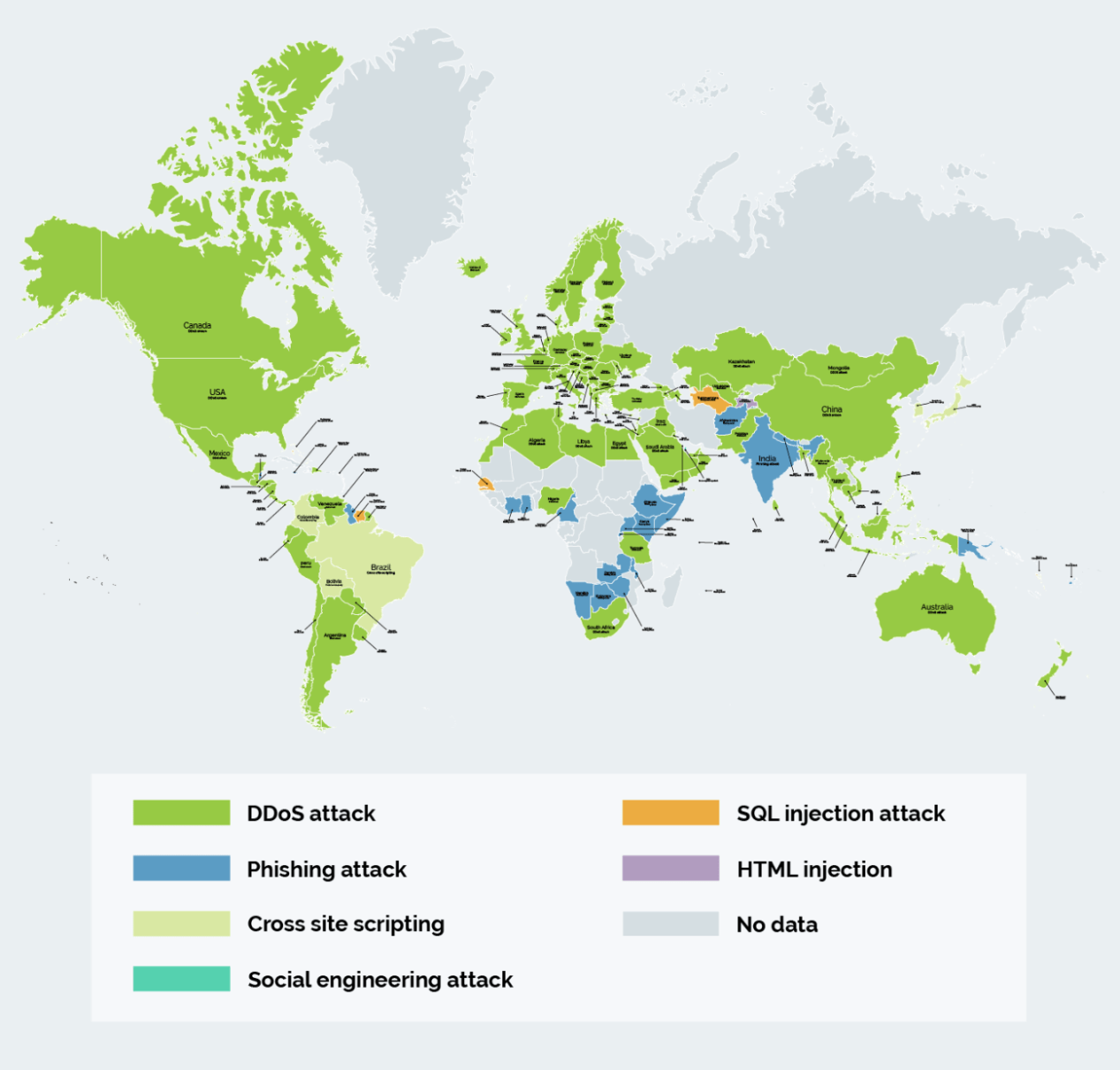 The top 10 most searched-for cyber threats around
the world

The data also revealed the top 10 most-searched-for threats globally. Exploring these threats can further help define the solutions needed to secure networks from the most preoccupying cyber threats worldwide.

As well as being the most searched-for cyber threat across 95 countries, DDoS attacks are also the most searched-for globally, with 94,750 searches in the past year. When you hear that a web server, service or network has been taken down by hackers, the chances are that a DDoS attack has been used to do it. These attacks can even bring down the largest servers by overloading them with more requests than they can handle. Unable to meet the demands of these requests, servers or networks crash.

What’s perhaps more alarming is that you don’t even need to be a hacker to carry out a DDoS attack anymore. Cyber criminals now create botnets that they sell or lease on the dark web. With these ready-to-go DDoS kits reportedly available for as little as $10 an hour, it’s no surprise that this type of cyberattack is the most searched-for around the world.

Find out which other cyber threats made the top 10 list below. 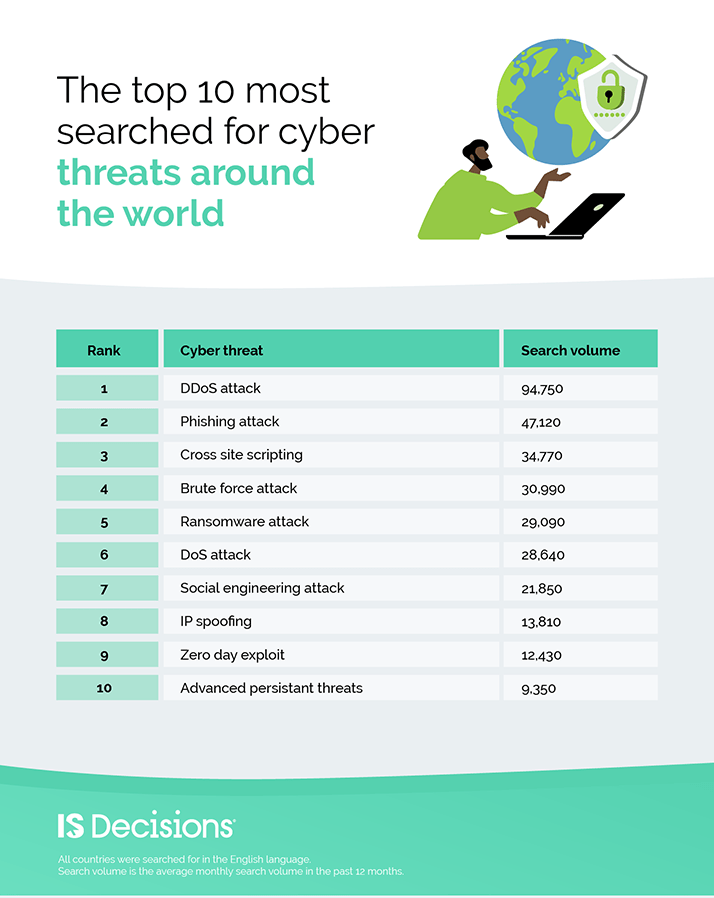 Hackers are becoming more sophisticated as they build upon attack methods already in use, trying to improve on what worked before. This can leave IT leaders feeling that they lack the resources and time to make sure their security keeps up with the risks.

Threat prevention is essential to a company’s cybersecurity, and there are many effective ways to ensure layers of protection. However, because of network complexity and the number of applications, users, systems and devices that many organizations have, there is no single, standalone layer of protection that guarantees 100% protection across all an organization’s IT assets. But, as cyber attackers become more cunning, so should the prevention measures used to stop them.

Find out which other cyber threat prevention methods people are searching for the most below. 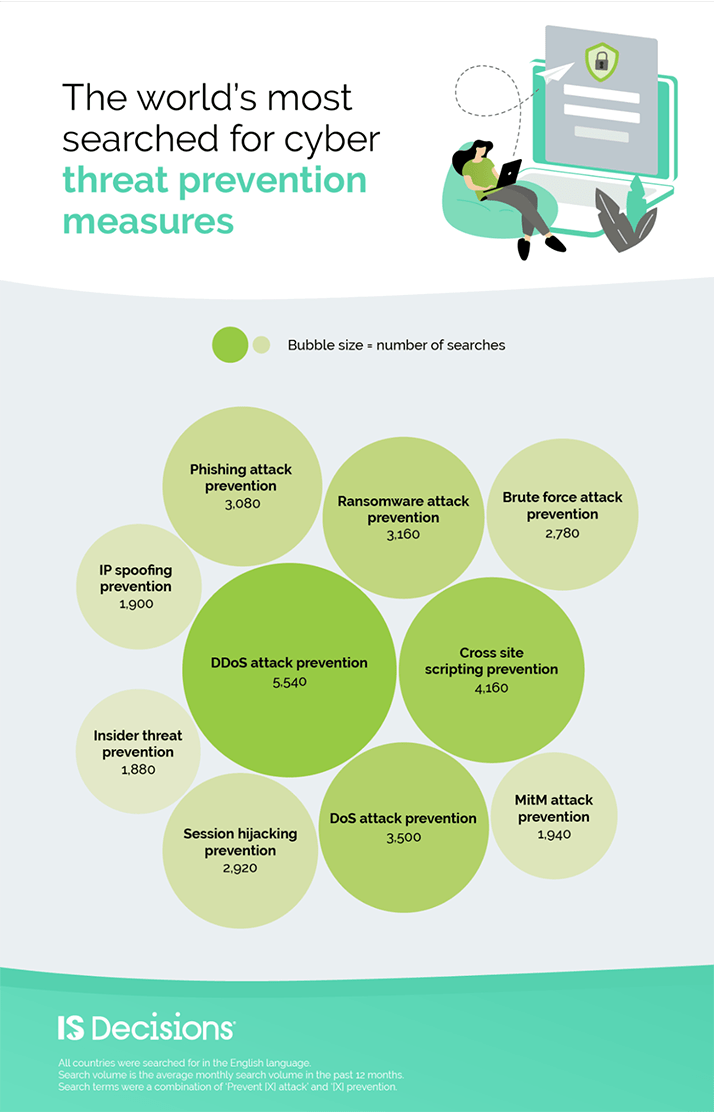 A vast number of the attacks referenced above can be migrated by stronger access security, primarily using multi-factor authentication (MFA). Many attack patterns require a logon in order to work, including: phishing, brute force/password, ransomware, social engineering, and man-in-the-middle attacks. So, while logons provide one of the clearest indicators of compromise, they are also one of the easiest places to secure to prevent an attack. Single username and password combinations are no longer enough to keep hackers away, and we have known this for a long time.

Multi-factor authentication requires individuals to provide more than one factor (usually a password) to ensure that they are who they say they are, adding much more security to a simple username and password combination to access a network. Therefore, MFA makes it harder for hackers to access a company’s network, services or data because it adds an extra layer of security to authenticate that the person trying to get access is indeed the person who is intended to have access.

We collated a list of 50 cyber attacks and threats from various seed lists. We collected the global search volume across each attack/threat as well as the search volume for preventing each attack/threat. We analyzed the top 10 most searched-for threats in every country, as well as the most searched-for cyber threat globally, and the prevention of each attack globally and per country. For the purpose of this campaign, those that were synonyms of the same attack were removed from the final results, and countries with insufficient search volume data (those with SV of 10 or less) were also removed from the list. Where two terms were tied, we cross-referenced with a secondary search volume tool to get the highest result. All searches for all countries were performed in the English language. Data collected October 2022.